In some ways, GGC was my first con. I've been to Chicago Comic Con (before it was Wizard World, and after), been to C2E2, ChamBana Con, Duckon, and maybe a couple others I don't recall... but this one was the one I was fully invested in. Hell, I packed 4 pairs of shoes to wear with different outfits (and wore only 2 of them, opting on Sunday for the comfy shoes I flew in wearing). This was my first time cosplaying, and I went on Saturday as Rosie the Riveter (though I skipped the costume contest, because I loathe being on stage).

Friday night was the kickoff party, the burlesque show, and the after-party at the coffeehouse with the Doubleclicks. After I picked up my pass, I went to the Tap House for dinner because my clock was on Chicago time and I was starved. Exhaustion and a blistered heel sent me back to the hotel after I ate, and straight to bed. I'm sorry I missed the festivities, but I was so damn tired...

Saturday, I got into my Rosie gear and went down to breakfast. A woman actually stopped at my table and thanked me for dressing up as Rosie. :) Then I trekked down about 30 minutes before the con opened. We weren't allowed into the Conference Center yet, so we were queuing up outside. The dude in front of me (loud, annoying), commented at about 9:05 (5 minutes late) that it figured a "con run by chicks" wouldn't run on time. I said nothing but wanted to smash him with my backpack (he had loudly commented on a few minutes earlier as something that shouldn't be allowed at cons). Whatever, dude. You're an ass.

Anyway, after we filed in, I headed up to level 3, and did a little shopping, picking up Mike Madrid's new book, Divas, Dames & Daredevils,  as well as Miss Fury: Sensational Sundays 1941-1944. (In hindsight, Miss Fury was a bad idea -- it's a coffee table book, hardcover, and I had to carry it around all day; on the other hand, I got it for half price, and it was their last one. Who am I kidding? It was totally not a bad idea!)

I went down to level 2, where some folks from EMP were set up in a dim corner with Margaret Hamilton's hat from The Wizard of Oz. One of the hats, anyway, but it was one of the ones she wore in the film. 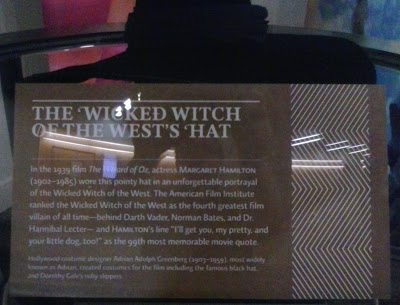 While I was queued up for Madrid's panel and talking with a really nice girl in line with me, he walked past and asked "Are you Rosie the Riveter?" "Yes... you're Mike Madrid!" He waved off my acknowledgement and asked if he could get a picture. A couple others got photos, too, since I was posing. But I was enormously flattered, and had my first fangirl moment of the con.

His panel was about the new book, and it was so interesting to hear about some of these long-gone Golden Age heroines, largely forgotten today. I was able to ask if he could see any of these heroines revitalized and brought to film, who would it be? (see below)

A lot of the time, it feels like I'm the only one who cares about these forgotten heroines. I know I'm not, but I've never met anyone else who is interested in them and doesn't want to see their legacy fade... until now. It was a real pleasure to meet him. Mike Madrid is a very nice guy, and anyone who loves these ladies as much as he does is clearly a person of superior taste and sophistication. (Next on my list of people to meet who love these heroines: Trina Robbins.)

The SuperMOOC panel was the next panel I didn't want to miss, mainly because I wanted to meet Christina Blanch in person. I took that class, and it was a pretty amazing experience; I wanted to be able to tell her in person how important it had been to me. There were a few others of us in the room who'd taken the class, but we didn't manage to connect. Afterward, I was able to get my husband's Kingdom Come books signed by Mark Waid (who is also an incredibly nice guy), and told him how much I enjoyed the MOOC and his participation in it.

When I went down to Wild Rye for lunch, I got in line, and checked with Bane and Catwoman if they were also in line. They weren't, but it turned out that Bane was the dudebro from that morning. He commented about me not recognizing him, even though I was behind him in line, and I said that I recognized his voice, and that the con didn't open a little late because it was run by chicks. His friend laughed when he said "thanks for callin' me out!" "You said it, and you said you were going to tweet it." "He doesn't even have Twitter," she said. Oh well, too late, I called him out that morning after he said it. Ass.

I was originally going to go to another panel, Fat Girl: Fan Girl, but I was so tired... I ended up skipping it in favor of going back to the hotel to decompress and change for the concert. I also decided to be comfy for the show, and didn't wear the outfit I'd planned on. I didn't want to fool with public transportation and caught a cab to the EMP. I heard wonderful music from Unwoman and Marian Call, and LMAO at Bri Pruett -- it was pretty awesome. Bought CDs, chatted briefly with Pruett (who I kinda wanna adopt; I wonder if she needs a sister?), and when I happened to look up when I went outside, I saw this: 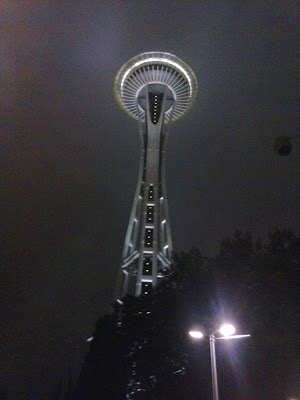 Ha! I totally didn't realize that the EMP was right next to the Space Needle. I didn't see it on the ride in, but we came from the other direction. So that was kinda cool. At night, kinda misty, all lit up -- I think it was better seeing it like this than in the daylight. Anyway, once I got back to the hotel, I was just keyed up enough that I had trouble getting off to sleep. Which did not stop me from waking up way too early Sunday morning...

The panel Romance Is a Feminist Genre was really interesting, and I had never considered it that way before. "Shipping" (short for relation"ship") in fan fiction was discussed, as well as how romance is still sneered at by book reviewers even though it's the #1 selling genre of fiction. The panelists were outspoken and interesting; I wish the panel had been longer.

The Spotlight on Kelly Sue DeConnick was the next panel I attended, and I pretty much needed to get in line for that as soon as I left Romance. (OK, it wasn't quite that bad, but it was a very well-attended panel, because KSD rocks.) After the panel, she was signing books, and that line was unbelievable. She have her time to each person -- this was no assembly-line autographing. I stood in line for an hour (and actually had to ask a con agent to please have Jennifer Stuller sign my copy of Ink-Stained Amazons, because I didn't want to get out of line -- which she she did, and I am grateful!). After I got Captain Marvel signed, Hope Larson was at the table and I was able to get my copy of her graphic version of A Wrinkle in Time. In all, I ended up with nine signed books and a signed CD (because I messed up and didn't ask for the two others to be signed as well).

The last panel I attended was (Re)Creating Female Sexuality in Comics, and it was a little disappointing. The description read


"examine how woman-created comics simultaneously subvert existing representations and celebrate women's sexuality. The goal is to engage in a community discussion of the role of female comic book creators in the industry, and inspire attendees to produce their own works."

For me, it seemed more like a PowerPoint presentation giving a few examples of how sexuality exists in Wonder Woman and a few select webcomics. There was very little discussion, and I didn't hear any inspiring words for creating my own work. *shrug* Perhaps others had a different experience.

After that, I sat in on the last half of the 80s singalong (I'd've had more fun if I skipped the sexuality panel and gone straight to that), then stayed for the closing celebration. Two of the organizers (Stuller, and I completely forget the other woman's name) spoke briefly, and The Doubleclicks performed "Nothing to Prove"... and it was over.

Exhausted, I walked back to the hotel, ordered a pizza and watched the last half of Indiana Jones and the Temple of Doom.

There were many other panels I would have liked to have attended, but it was a little overwhelming. The girl I met had blocked out most of her con with panels she wanted to see, and I almost did the same... maybe next year I will.

SO MANY talent artists and craftspeople! I came home with wonderful loot. But I think that needs to be its own post. In part because I'm still so tired I can't hardly think straight.

Summary: Geek Girl Con rocked, and I can't wait for next year!
Posted by W. A. Whipple at 1:21 PM